Nothing we’ve seen in Africa quite comes close to South Omo. Here, you don’t find a trace of “modern Africa,” and passing through the Ethiopian mountains was like entering a time warp.

Even up to 50 years ago, the people of South Omo weren’t aware of an “Ethiopia” entity. From the Mursi women who stretch out their bottom lip to fit a lip plate, to the Hamer men who jump across bulls to mark entrance into adulthood, South Omo is veritably a living museum. When we heard we were just in time for the bull jumping ceremonies, we stopped the car.

With our guide in hand (visit the local Tourist Hotel if you’re in need of help), we drove into the bush. At some nondescript location, we parked the car and started hiking through the savannah. Then, out of thin air, a half-clothed man appeared, stared for a few moments, and invited us to tea at his house. I looked at Eugene. Why not?

The local Hamer man led us to his two huts, and presented us with two nut shells, filled with beans and hot water and definitely a few ants. Politely, we sipped our tea. We tried to make conversation, but alas, Amharic either isn’t familiar to them or they preferred silence. Either way, we thanked them and set about another half hour hike to the ceremony. 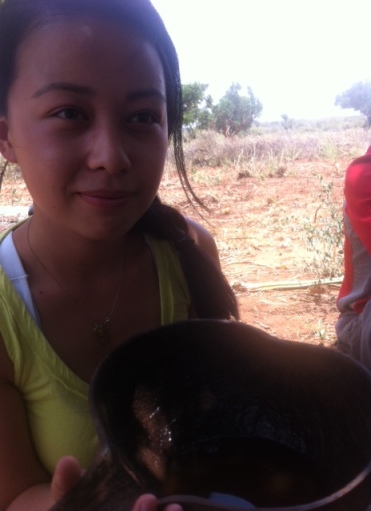 We arrived just in time to watch the singing and dancing. As we were getting settled, a loud crack! sliced the air.

I looked up to see a woman being whipped on the arm so hard, that the tree branch twisted around her body and cracked open her back. Almost immediately, she grabbed the whipper’s arm and urged him to do it again. He hesitated, but acquiesed. Our guide explained that the beatings show devotion, and the honorific scars are treasured for life. 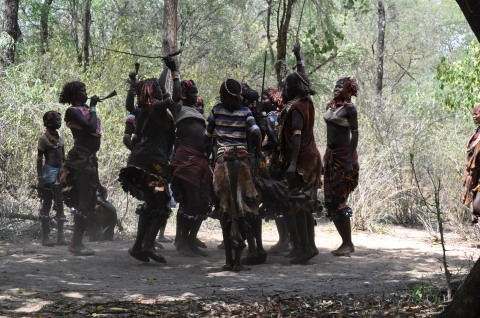 The rest of the clan was also busy getting themselves ready for the final ceremony. 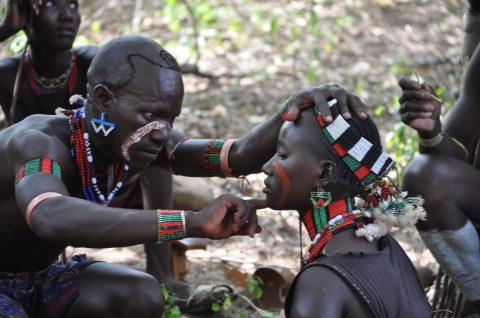 Later in the afternoon, everyone began moving to a clearing, where a herd of cattle gathered. The initiate, stark naked, let onto the back of a bull. Then he continues jumping from bull to bull, until he reaches the end of the line. Again and again, until the crowd shows its satisfaction.

Getting a running jump!

A boy no longer, he will now consume only meat, milk, blood and honey until he marries. Manhood!