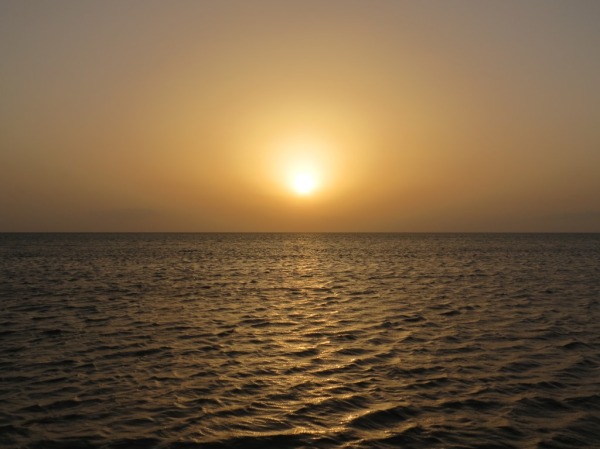 Crossing over to North Sudan

Driving down from Gondar in Ethiopia to the Sudanese border takes you from a very cool elevation of 2,100m down to just 600m. Upon arriving at the border town of Metema, we were completely dumbfounded by the intensity of the Sudanese desert heat. “Only 38 degrees today!” the locals cheerfully replied. “In Khartoum, it’s 46!”

We picked up a local ‘helper’ who pointed us in the direction of the customs and immigration offices and we later followed him to get some money exchanged. Advice we’d received beforehand was that money would have to be exchanged in Ethiopia prior to entering, as there were no facilities across the border. This proved to be completely false: plenty of Sudanese will happily exchange both Birr and USD for Sudanese pounds, and at vastly better rates. We learned that the hard way.

With my pockets stuffed with Sudanese pounds (for the record, we changed at 4.6 pounds to the dollar compared to Khartoum’s 6) we crossed into what would turn out to be a completely different world. Having experienced the frightful presence of the Sudanese consul in Addis, we were not completely sure what to expect, and entered immigration with trepidation.

“Welcome to Sudan!” a gentleman boomed. “Salaam alekum!” greeted another. And it continued. After the near constant harassment we received throughout Ethiopia, the contrast with the genuine friendliness of the Sudanese was astounding.

The administration however, is intense, and we ping-ponged between immigration, customs, and the local police for about another hour, leaving the border town to look for a bush camp just as the sun was coming down.

It was approximately 600kms from our camp to Khartoum and on the way, we turned into a fuel stop for a much needed top up. At the pump, Christine spotted the diesel price. 22 pounds per litre, roughly $4/L!! Surely it wasn’t correct, but we were desperate and I reasoned that they were pounds per gallon, not litre. As the totals climbed to 700 pounds for what appeared to be 15L of fuel, I started waving my hands frantically to stop the serviceman. We were about to burn through all the money we had!

I gleefully extracted my wad and handed over 700 pounds to the serviceman, and now it was his turn to start waving his hands. Laughing, he promptly returned the money and then carefully extracted just a 50 and a 20 from my hand. It turns out much of the country still quotes prices in dinars, which are a tenth of today’s pound. Hence, 700 dinars was only 70 pounds, equating to 40c/L for diesel. I was loving this country already!! It turns out that 40c/L was indeed steep for Sudan – in Khartoum we regularly filled up for around 24c/L. Incredible!

Accommodation in Khartoum is aimed mostly at the NGO crowd and hence, very expensive. After scouting unsuccessfully a number of supposed camp sites outside Khartoum listed in our GPS and Bradt guide, we headed into town to try our luck. We found the local YHA hostel, thanks to our good friends Linda and Juergen and lo and behold, they had a camp site going cheap. Whilst the shared facilities are not the best, we’ve heard they are much better than the traditional Blue Nile sailing club and would certainly recommend.

In Khartoum we had a chance encounter with Abdelsalaam, owner of Farbest Auto, after needing to do our regular servicing on the PPE. Abdelsalaam would turn into one of those super memorable guys along the likes of Paul de Witt (Henties Bay, Namibia – best calamari in the world!) and Laurence Lindley (overlander extraordinaire) who simply went out of his way to help us out in anyway he could. After we met Abdelsalaam there wasn’t a day we were in Khartoum that we didn’t stop by to say hello and we came across some incredibly interesting people just hanging out at his workshop.

The Sudanese were the kindest people we have come across on our entire trip, and I couldn’t help but feel we were experiencing Islamic culture at its very best. I think of Abdelsalaam as a great friend and would encourage anyone coming through Khartoum to drop in on him +249 912 304 675. Leave us a message if you need GPS coordinates.

In 1998, the US ordered a cruise missile bombing of a pharmaceutical factory in the middle of Khartoum, in retaliation against Bin Laden’s bombing of US Embassies in Dar es Salaam and Nairobi. We visited the site through a nondescript door which opens right onto the bomb site, which has been left pretty much ‘as is’.

The US bombed the site based on a single piece of evidence – a single soil sample containing chemical traces used in the production of VX gas. No traces of any weapons were ever found following the attack. The factory produced over 90% of anti-malarial and tuberculosis treatments within the country.

Port Sudan and the Red Sea

We had decided that at The Red Sea, we would turn the PPE around and head back for Tanzania. Funds were running low and there was no way we would ever be able to sell the car in Egypt. Going for a swim in the Red Sea after driving through the Sahara would be a great way to cap off the African adventure.

It was another 800km from Khartoum to the Red Sea, and we crossed in roughly 2 days. In between, it is flat, endless desert, until you reach some unexpected mountains just before reaching the coast. We bush camped in the Sahara under the African stars along the way, and those nights camping were certainly some of our most memorable nights.

Our intention had been to dive in the Red Sea, however, the only options available were liveaboard week long trips. Operators doing day trips were in their infancy, and we decided not to go with any of the inexperienced operators.

The Red Sea Resort is the only real accommodation you can find on the shores of the Red Sea, about 60km north of Port Sudan. It was still under construction when we arrived and was way over priced (camping was 20 euro pp) , with poor service and unreasonable management, so we decided to try our luck bush camping.

Sunrise at our own private beach

This turned out to be one of the best calls of the trip – our beautiful spot, right by the water was literally 5min down the road from the Red Sea Resort. I would suggest anyone going out this way do the same – I bet there are hundreds of spots just like this little gem we found. We stayed 3 days! 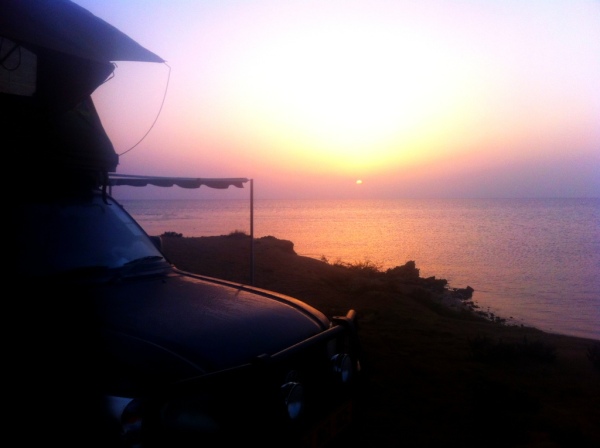 Sunrise over our own private beach!